From WikiHaj
Jump to navigation Jump to search

In ramy (stoning), some conditions to be followed are mentioned below:

It is permissible to perform ramy (stoning) from the upper floor (the bridge of Jamarat). However, on the basis of caution, it is better to perform it from the ground floor.

The chosen pebbles for stoning should have the following characteristics: 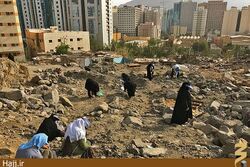 The time duration for ramy (stoning) is from sunrise till sunset. Thus, it is impermissible, in normal conditions, to perform this deed during the night. Shepherds and those who have a reasonable excuse for not performing ramy (stoning) during the day such as fear for their money, life, or honor are exempted. Likewise, weak individuals such as women, old men, and children, who are afraid of big crowd, are also excluded from this ruling and allowed to perform ramy (stoning) at night.

People, who are excused from ramy (stoning) during the day, but able to do it at night, are not allowed to appoint a representative for ramy. They must perform this act themselves at the night before or after the day. However, those who are unable to perform ramy (stoning) even at night, like sick persons, are allowed to appoint a representative for that task. However, if at the time of hiring another person, he/she is hopeful to become free from excuse, on the basis of obligatory caution, he/she should repeat the act of ramy (stoning) at night if he/she becomes free from that excuse during the night.

For a person who is unable to perform ramy (stoning) and appoints a representative and he/she performs the ramy but then before the time for performing ramy is over the person becomes free from the excuse, there are two case:

The ramy (stoning) at the three jamaras is obligatory but it is not considered a fundamental element (rukn) of hajj, so if someone does not perform it his/her hajj is not void. For a person who forgets ramy of all the three jamaras and goes out of the land of Mina if he/she remembers during the days of Tashriq, it is obligatory to return back to Mina if possible, and perform ramy; otherwise he/she must appoint a representative for doing it on his behalf. If he/she remembers it after the days of Tashriq or deliberately delays it, on the basis of obligatory caution, he/she or his/her representative should return to Mina to do it and perform ramy again next year with intention of qada' or appoint a representative for this purpose. If a person forgets ramy at jamaras and goes out of the holy city of Mecca, on the basis of obligatory caution, should perform it with intention of qada' next year or appoint a representative for the act.

It is permissible to throw pebbles at every side of jamaras. It is not necessary to face qibla during stoning.

On the Day of Eid al-Adha[edit | edit source]

Ramy (stoning) of al-al-Jamara al-'Aqaba (the last jamara) on the 10th of Dhu l-Hijja (Eid al-Adha) is the fourth obligation of hajj and the first rite performed in the land of Mina.

The women and the weak —who are allowed to go from al-Mash'ar al-Haram to Mina during the night before the Eid al-Adha (see wuquf at al-Mash'ar al-Haram)— may perform ramy (stoning) at al-al-Jamara al-'Aqaba at night in case they are unable to perform it on the day of Eid al-Adha. Rather, all women can perform ramy at night, provided that the ramy is for the hajj they are doing, whether they are performing their own hajj or [the whole hajj] on behalf of another person. But, on the basis of obligatory caution, if a woman is doing [only] ramy on behalf of another person, her act of performing ramy is incorrect at night even if she is unable to do it during the day. Those who accompany the women or the weak may perform ramy (stoning) at al-al-Jamara al-'Aqaba during the night only if they are themselves excused. Otherwise, it is obligatory that ramy (stoning) should occur during the day.

One should throw stones at all the three jamaras (the first, the middle and the last) during the day after the night in which baytuta at Mina (staying the night at Mina) is obligatory.

The order to perform ramy is as follows: Firstly, ramy al-Jamara al-Ula (the first jamara) followed by al-Jamara al-Wusṭa (the middle jamara) and finally al-Jamara al-'Aqaba (the last jamara) should be stoned. One should throw seven pebbles at each jamara according to the prescribed method and conditions.